Docker is a flexible ,lightweight, interchangeable, portable, scalable and stackable platform for developers & sysadmins to develop, deploy, and run applications with containers. The use of Linux containers to deploy applications is called containerization. Containers are not new, but their use for easily deploying applications is.

Images and containers A container is launched by running an image. An image is an executable package that includes everything needed to run an application–the code, a runtime, libraries, environment variables, and configuration files. A container is a runtime instance of an image–what the image becomes in memory when executed (that is, an image with state, or a user process). You can see a list of your running containers with the command, docker ps, just as you would in Linux.

A container runs natively on Linux and shares the kernel of the host machine with other containers. It runs a discrete process, taking no more memory than any other executable, making it lightweight. By contrast, a virtual machine (VM) runs a full-blown “guest” operating system with virtual access to host resources through a hypervisor. In general, VMs provide an environment with more resources than most applications need.

Not all applications and organizations are going to have the same infrastructure requirements. The aforementioned benefits of containers make them particularly adept at addressing the following needs:

Lets get the game started by installing Docker from here.   Test that your installation works by running the simple Docker image:

It is important to understand the below three components to get a holistic picture of docker:

Running your image with -d runs the container in detached mode, leaving the container running in the background. The -p flag redirects a public port to a private port inside the container. Run the image you previously built:

When it runs, you can access it in your localhost using the browser.

You can see the abbreviated container ID with

You can stop the container using the following command:

Lets move the magic to Heroku

Every cloud provider is supporting Docker now, but I have to say, Heroku again proves the simplicity it offers to the developers. As always, it is as simple as a docker push. The only other service that is as simple is Hyper.sh, but Heroku has a few advantages like a built in load balancer, the ability to scale, many years of working out the kinks and hell yes its a Salesforce company.

This assumes you already have the Heroku CLI installed. Install the Heroku container registry plugin for the cli:

Login to the registry:

That command will return an app name, copy it to use it for the next command. 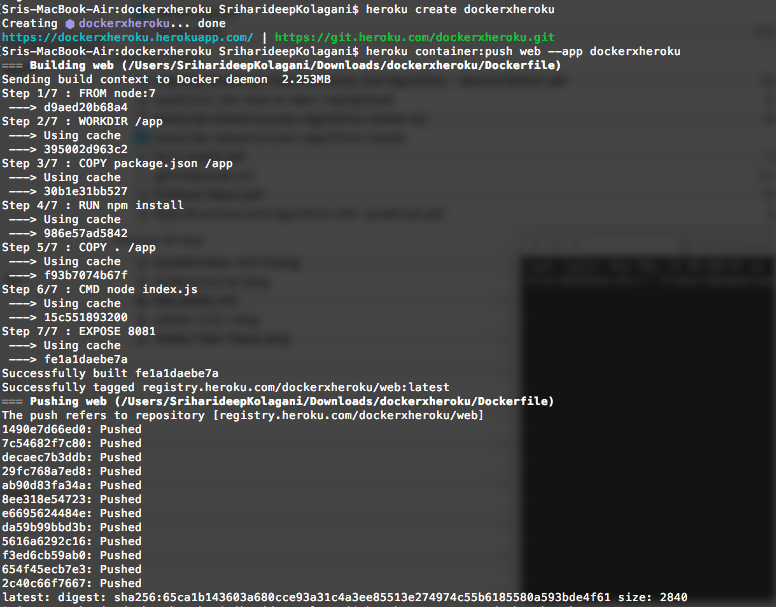 It will build your image and push it to Heroku. Check out your live app with:

You’ll need to get your Heroku token which you can get from the cli on any machine that’s logged into Heroku:

Grab the returned token and from this point on, you don’t need Heroku CLI anymore. Use the token to login to the Heroku Registry:

Note: The email and username are actually the underscore, don’t change those.

And then just push your image: